The early Tasmins were fitted with a trailing arm suspension the earth end of which was located on the chassis by an inadequate design. Basically a pin was fitted into a rubber bush and then cantilevered off the chassis. The trailing arm then pivoted on the pin, so any large loads moved the pin in its bush and allowed the camber and toe in of the rear wheels to vary. (see photo 1 )

This became very apparent recently when I was applying more negative camber via the rear adjustable tie rods. As well as in creasing the camber the adjustment also increased the toe in by a large amount. Whilst investigating this problem a lever was applied to the end of the trailing arm and the result was the whole wheel and suspension could move aft by about 10 mm and the geometry totally changed. NOT GOOD. In an attempt to limit movement of the suspension a rubber bushed drag link had been fitted between the suspension and the chassis. (see photo 2)

Paul Forrest, at X Works Services, and I had discussed this before and decided to redesign the mounting of the Earth end of the arm. I had seen grainy photo’s of how some people had done this incorporating a spherical bearing and making a bracket that would hold the associated pin in double shear and hence a stiffer stronger design.
The bearings used were 0.625” bore with a 0.75” UNF thread. A sketch was produced of the assembly and Paul removed the existing suspension and pins and fabricated a bracket and welded it to the chassis (see photo’s 3 & 4 ). 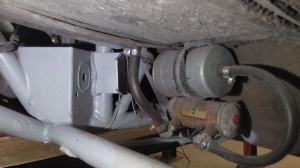 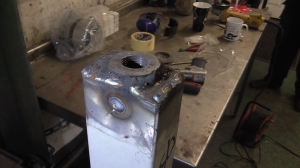 The arms complete with adjustable, spherical rod ends were then trial fitted into the newly fabricated brackets and packers fitted to locate the arms to give the approximately correct camber and toe in angles. The final adjustments can then be made by rotating the eye ends. Conical spacers were manufactured and fitted to allow lateral rotation of the spherical bearings without binding.
(See photo’s 6 & 7) Before fitting of conical spacers 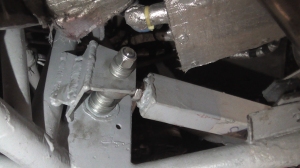 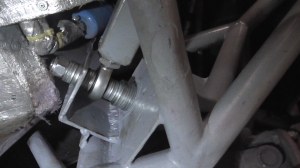 I will report back after a session on the track at 3 Sisters.
Many thanks to Paul Forrest at X Works Sevices who turned ideas into reality, and my Friend Sean Bourne who manufactured the threaded bushes and conical spacers.