All through the week the weather forecast was rain and thunder storms for the Saturday event, however the weather did in the end stay dry and warm but overcast. This was the first time at Barbon for myself and fellow members of the “Blackpool Zimmers and Zoomers” Andy Lynch and Duncan Woodcock.

The event had attracted 90 entries, which is 50% more than they have ever had, this explains the chaos in the paddock where we parked basically where we could. After the normal preliminaries of sign on , briefing and scruitineering the first practice runs started at about 9:30. We had all been looking on You Tube to watch in car videos to see where the track went! and how best to tackle it. When you see the actual course it is much steeper than it appears on the videos. Duncan was best of the three of us after the practice runs beating me by 0.25 of a second and Andy by 0.96 seconds.

We all commented on how much we enjoyed the course and though only short it was technical and offered a good challenge. We completed 2 practice and 3 timed runs by mid afternoon though Andy missed the last run as his car decided to stop running as he was leaving the paddock.

I t was a good event and we will certainly go again especially as they promised to sort out the paddock layout. 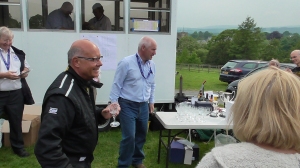 Duncan getting his trophy, second event and first trophy, that a good strike rate!