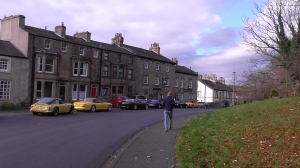 The new system worked! those wanting to go on the run contacted me prior to going so I knew how many would be going and where we could meet up with people on the way. Thanks to you all for doing it tha way it makes it much easier.

Jim Edwards, Heath Briggs, Bill Campion, Mark Warburton and Ray and his son met up at the Tickled Trout in Preston and departed for Kirby Lonsdale at the leisurely time of 10:30am. We met up with Andy Lynch and his brother at Mc Donald’s on the outskirt of Clitheroe and from there we took the roads through Waddington, to Newton, where Peter Wheeler used to live. From there we went via Slaidburn to Settle where we stopped for a coffee. If you have never been along these roads they are amongst the most beautiful in Britain and driving them should be on every petrol heads “Bucket List” of things to do. After Coffee and Bacon balm cakes in Settle we set off to Kirby Lonsdale which was packed solid with visitors and no where to park so we headed back towards home. Some took the scenic route through Hornby But I was last to set off and made a wrong turn and could not find the others so headed home on my own. Well it’s not a Blackpool Run out unless someone gets lost, and it’s not unusual for it to be me!

3 Responses to Run out to Kirby Lonsdale Sunday 24th November