The TVR Stick of Rock Relay finally commenced it’s journey today with the Blackpool Region being honoured with starting the relay from the old TVR factory in Bristol Avenue. Fifteen TVR cars and approximately 30 members were there. Martin Lilly attended the event and started the relay by handing over the Torch to myself. Photographs were taken by club members as well as the Evening Gazette and Lancashire Magazine staff who also interviewed the businesses in the old factory.

After the initial photo shoot we escorted the Torch to the car parks adjacent to the Blackpool F.C. Stadium where we were able to line up all the cars and members for a group photo. The original intention was to have the Tower in the background but unfortunately there was screening in place about half way up the tower and it did not look its best. From there we had a great run over in the sunshine to the Lancashire region meeting place of the Rigby Arms where we were met by Steve Johnson and a good number of their members. We took maximum advantage of the weather by having drinks and a bite to eat outside overlooking the bowling green.

So there we are we have started the torch on its way, however it will be a miracle if the stick of rock is still in one piece at the end of its journey round the country. 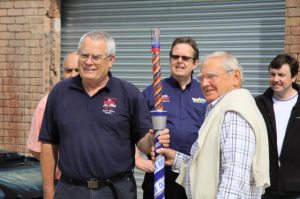 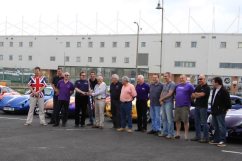 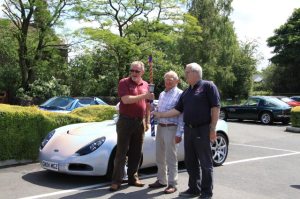