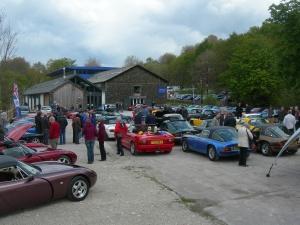 As you can see from the photo the weather was bright and sunny and approximately 5o cars attended the event. The Museum ,Cafe, car parking and proximity to the hotel made it a great venue for the event. Many ex TVR people attended including  Martin Lilley, Special Projects Manager John Box, Service Manager Eddie Hall, Secretary Carole Newton.

Gail and Dave Cleverly organised a raffle which raised over £350. The money was given to John Mleczek and will be used to help cover the travel insurance costs of Dave Hives who along with John have been invited to go to America and speak at the Griffith meeting to be held there this June. I also approached the members of the Blackpool Region who were present and asked if they would further support the the costs of Dave by donating money from the club funds. The £100 donation along with the raffle money was presented to John in the attached photo.

The Museum offered a reduced entry to the exhibits which did contain some beautiful and interesting cars, including TVR 2. The sunny weather allowed us to enjoy a very relaxing lunch and other coffee breaks outside by the river.

It was great to see some of the members who have not been able to attend meetings for a while including Terry Megson in his new bright red Tamora, having decided to sell his Cerbera after 7 years of ownership.  Ian and Loraine Francis arrived after lunch to enjoy the sunshine and Kevin Baker and Jane Pyne also attended. All in all it was a good event that I really enjoyed.

Another new attendee was John Mleczek’s new 350i which looks very nice, thiugh John describes it as work in progress. I am pleased to welcome another Wedge to the fold!

Foot note:- I received a phone call tonight from David Hives thanking the region profusely for helping him to go to America in June.